By Administrator on November 10, 2015 in From the Black Vault 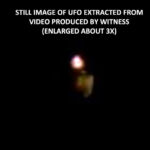 The following is used, with permission, from UFOs NorthWest.

Description: Hello:
I have just sent you an email that contains a video I captured about two weeks ago on my phone. The video was originally lost in the storage sense area, and I believed the video to have not even been recorded until I happened to find it about a week ago. I tried to send you an email and attach the video. However the file was too large and it wouldn’t send. It said to share with “one drive”, which I hadn’t done before, so I am not sure how it worked out, or if it said it was sent from my email address, etc. Please let me know if you have received the video, and any thoughts, comments, etc. regarding the strange objects. I will attach to this email some still shots captured from the video when it was paused and zoomed in. The first photo is the strobing star thing and the strange floating object underneath was not seen by eye, just on screen, and seems to morph. The second photo shows that the object has moved from underneath the strobing thing directly and is now directly down to the right.

Thank you so much for your time, and I hope to hear from you soon.

Second Report From Witness: This video was recorded at 4 AM about two weeks ago. I have severe anxiety which tends to keep me up at night. On this particular night, it was a bad attack. I was out of cigarettes and I had my fiancé go to the gas station to buy me some. Before he left, he called me outside to look at a strange, very large and close “star” which seemed to be strobing multiple colors. Immediately, I took out my phone to record, and on the screen I noticed something strange seemed to be floating directly underneath, though I was unable to see this in the sky, only seeing the strobing object. After I had recorded the video, I scrolled back to show him what I had captured, and the video was not there! About a week ago, I noticed that some of the pictures I had taken of my puppy weren’t there after I took them. I searched my phone, and found in the “storage sense” area of my phone (a Nokia Lumia) that the pictures were somehow being sent there instead of saving in their normal album. I also saw that there were some videos, and was shocked to see that the video of the strobing star was there as well! I have watched this video numerous times, even slowing it down, zooming in, etc. I eventually even noticed that there are “hidden frames”, in which you can see actual triangular light formations and what appears to be a circular “ship”. I am not sure what type of technology you have for viewing these things, but any help would be much appreciated, as I would really love to have insight as to what this thing really is.

Thank you for taking the time to look into this, and please get back to me once you have viewed it with your opinion.

Note: Like all night videos this video is difficult to analyze. Attempts to change brightness and contrast did not reveal any useful information.

Update – Oct 19, 2015: Analyst David Mason writes: After reviewing the video of the shape changing UFO it’s difficult to make any significant conclusions. The AGC of the video camera was at maximum thus giving image/frame stacking producing time lag which can generate an image that appears to shape shift while a camera is shaking. This image stacking can generate artifacts when directed at a relatively small light source and can be mistaken for something unusual when a video is reviewed.There is severe clipping of the video background as no details can be resolved through extensive histogram stretching. The audio is not present even after using 50 dB of gain. Sometimes the significance of removed audio and video clipping indicates editing.

Although that can happen when video and audio is converted or stored with non compatible formats.

Some cameras will clip a dark background if it falls below a predetermined threshold of CCD and gain noise.

There’s not enough video resolution or enough tangible information from the witness report to confirm the identity of the object.

More Comments From David Mason: This shape shifting UFO video may not be worth further investigation. The object could have been a star or distant aircraft heading directly toward the observer. The elongation of the object could have been the result of debris on the small sized phone lens. Shape shifting can appear to occur when a phone camera is at maximum AGC. There’s just not enough detail to resolve anything noteworthy even if there was audio or if it was shown in standard speed. I did speed up the video in my software, but that did not help.