Strange Goings-on in the Gulf of Mexico

Back on January 11th, we reported on ANP that several days before a massive, 7.6 earthquake struck in the Caribbean Sea, causing a tsunami warning to be issued to several Caribbean islands, ocean water had suddenly and mysteriously ‘disappeared’ in locations more than 2,000 miles apart, both north and south of the epicenter of that quake.

As videographer MrMBB333 told us in a video that we used within that story, “water is trying to tell us something”.

As we see from MrMBB333 in the 1st video below, something incredibly strange is going on in the Gulf of Mexico with air temperatures recorded at over 130 degrees over and over again the past week, with temperatures fluctuating between ‘normal’ temperatures in the 75 to 80 degrees range before suddenly shooting up to at least 133 degrees as we see in videos and the 2nd image below. 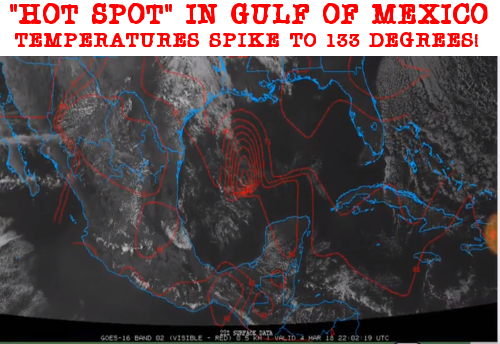 What might be causing the huge temperature fluctuations in the Gulf of Mexico we’re witnessing in the screenshot above from the 2nd video below from videographer rushfan9thcmd, who has been keeping track of this very strange anomaly now for over a week?

As we see in the next screenshot below of that same area which we’ve turned into a gif photo, the high-temperature spot is fluctuating, as if it is the Earth itself breathing, spiking to up over 133 degrees before falling back to ‘normal’ levels then spiking once again. What in the world is causing this strange anomaly in temperatures? Is something ‘venting’ in the Gulf of Mexico?

Back on March 19th of 2013, Nesara News published a story titled “A Buried Ancient Volcano In Southeast Louisiana” in which they told us about evidence of Late Cretaceous era volcanic activity being widespread in Louisiana as well as in Mississippi and southeast of Louisiana in the Gulf of Mexico.

Called ‘Door Point’, the proof of volcanic activity was found within an area which had previously been designated as being free of volcanism as seen in the next image below. Interestingly, that’igneous free’ area includes where we are now witnessing these extreme temperature spikes in the Gulf of Mexico as seen in the images above and the videos below. 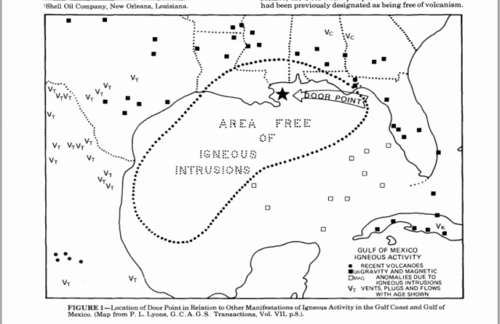 While the ‘Ring of Fire’ has been heating up with volcanoes all around the planet now erupting and big earthquakes indicating an even bigger one is surely ahead as we hear in the 3rd video below from Infowars, it’s not lost on those paying attention that the Gulf of Mexico borders the ‘Ring of Fire’ as we see in the next image below. Showing the world’s volcanoes, while the Eastern half of the US is largely ‘volcano free’, there are 12 volcanoes in the Caribbean islands with volcanoes marked in red in the image below. 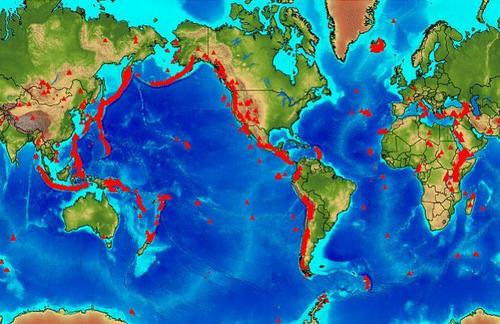 With the Caribbean Islands on a totally separate ‘plate’ from the rest of North America as seen in the next image below which also shows us some of the volcanoes in that region, and knowing that traces of volcanic activity have been found in Lousiana, Texas, Mississippi and other US states currently free of known volcanoes, is it really out of the realm of possibility that an ancient volcano, or at least volcanic vents, are somewhere within the Gulf of Mexico? 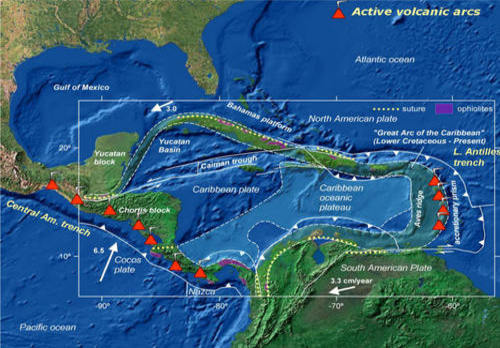 With the Caribbean plate also the location of intense seismic activity over the years, this entry from Wikipedia about the origin of the Caribbean islands is quite interesting, especially with what we’ll show you in our conclusion below.

The usual theory as to the origin of the Caribbean Plate was confronted by a contrasting theory in 2002.

The mainstream theory holds that it is the Caribbean large igneous province (CLIP) which formed in the Pacific Ocean tens of millions of years ago. As the Atlantic Ocean widened, North America and South America were pushed westward, separated for a time by oceanic crust.  The Pacific Ocean floor subducted under this oceanic crust between the continents. The CLIP drifted into the same area, but as it was less dense and thicker than the surrounding oceanic crust, it did not subduct, but rather overrode the ocean floor, continuing to move eastward relative to North America and South America. With the formation of the Isthmus of Panama 3 million years ago, it ultimately lost its connection to the Pacific.

The more recent theory asserts that the Caribbean Plate came into being from an Atlantic hotspot which no longer exists. This theory points to evidence of the absolute motion of the Caribbean Plate which indicates that it moves westward, not east, and that its apparent eastward motion is only relative to the motions of the North American Plate and the South American Plate.

Have we just found that ‘long lost’ hot spot that they claim ‘no longer exists’?

The post Strange Goings-on in the Gulf of Mexico appeared first on LewRockwell.

Anger across US as protestors clash with police | WNT

Anger across US as protestors clash with police | WNT