By Administrator on November 26, 2015 in From the Black Vault 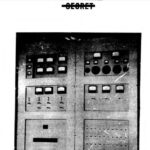 The following description was taken from recently declassified government documents, obtained by The Black Vault, about Project Corrode:

During the summer of 1952, a Study Group under the auspices of Lincoln Laboratory conducted a study of the defense of the United States against enemy air attack. This Summer Study Group recommended the establishment of a distant early-warning (DEW) line in the arctic region to provide warning of impending air attack sufficiently early so that effective defense measures could be initiated before enemy aircraft entered vital areas.

Late in 1952, PROJECT COUNTER CHANGE (now PROJECT CORRODE) was established under Air Force cognizance to provide for the installation of a model DEW line and for the development of improved equipment for early-warning application. As prime contractor for PROJECT CORRODE, the Western Electric Company agreed to furnish the necessary equipment and install it during the summer of 1953.

Certain phases of the initial development and engineering design were undertaken by Lincoln Laboratory In December 1951, and the commitments for the first phase of the field installations were fulfilled on the scheduled date of 1 May 1953.  The Lincoln Laboratory also provided supporting technical services. These included training of Western Electric operating personnel and the installation and initial adjustment of radar and communications equipment at the domestic sites. In the Far North, Laboratoty personnel assisted in the adjustment and initial operation of the VHF scatter-communication equipment (at this writing, similar services are being furnished for radar equipment).