By Administrator on February 1, 2016 in From the Black Vault 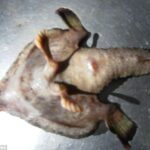 Explained? See Below for Possible Explanation

This case began circulating on February 1, 2016. The following was published by the U.K.’s The Daily Mail, which is copyright protected by their respective owners. It is reproduced here under fair use, and for archival/research purposes.

By SARA MALM FOR MAILONLINE

An ‘alien fish’ caught on a small Caribbean island has left experts baffled, as they struggle to determine its species.

The creature reportedly has ‘feet’ which allows it to walk across the seabed, a ‘ perfect human nose’, and scales like a fish.

The sea creature was caught in the port of Windward on the tiny island of Carriacou, a few miles from Grenada. 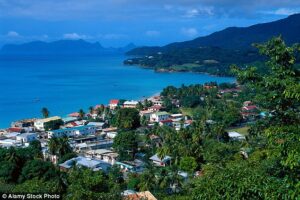 The ‘alien fish’ was caught on the island of Carriacou, a few miles from Grenada (stock image).

One islander said ‘Everyone crowded round to look – nobody had ever seen anything like it.

‘Quite a few people were pretty scared and thought it looked like something out of a sci-fi horror film.’

Veteran fisherman Hope McLawrence, 74, who found himself staring into the eyes of the ‘alien’ creature when he hauled in his nets, admitted he was astounded and baffled.

The foot-long beast had two feet with toes, no fin, a long bone on its back and ‘a perfect human nose immediately above its mouth’ according to Mr McLawrence.

‘I have never discovered anything like this before. The wings and tail looks extremely complicated.’

Mr McLawrence, who has more than fifty years experience in the fishing industry added ‘By the look of the creature it cannot swim but apparently walks on the sea bed.

‘This has shocked me to a considerable extent since I never thought that a creature like this even existed, much less in the harbour of these shallow, friendly waters.

‘This is like a mystery and breathes a chill with this discovery’ he added.

The fish is believed to be a frogfish, an ambush predator that can eat almost anything that will fit into their large mouths. This includes other fish as well as crabs and shrimp. 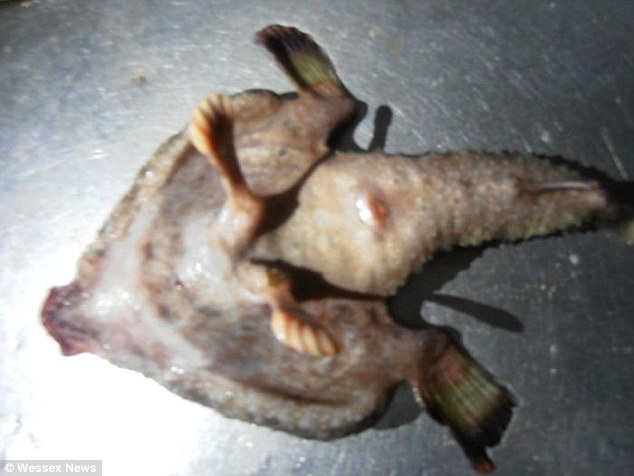 Although a lot of theories are beginning to circulate, and one expert in the article above called it a “Frogfish,” The Black Vault adds the following fish to this case file, which is in the oceans called a Walking Batfish.

The red-lipped batfish or Galapagos batfish (Ogcocephalus darwini) is a fish of unusual morphology found around the Galapagos Islands and off Peru at depths of 3 to 76 m (10 to 249 ft). Red-lipped batfish are closely related to rosy-lipped batfish (Ogcocephalus porrectus), which are found near Cocos Island off the coast of Costa Rica. This fish is mainly known for its bright red lips. Batfish are not good swimmers; they use their highly adapted pectoral fins to “walk” on the ocean floor. When the batfish reaches maturity, its dorsal fin becomes a single spine-like projection (thought to function primarily as a lure for prey). Like other anglerfish, the red-lipped batfish has a structure on its head known as illicium. This structure is employed for attracting prey.

Could this fish explain the mystery? 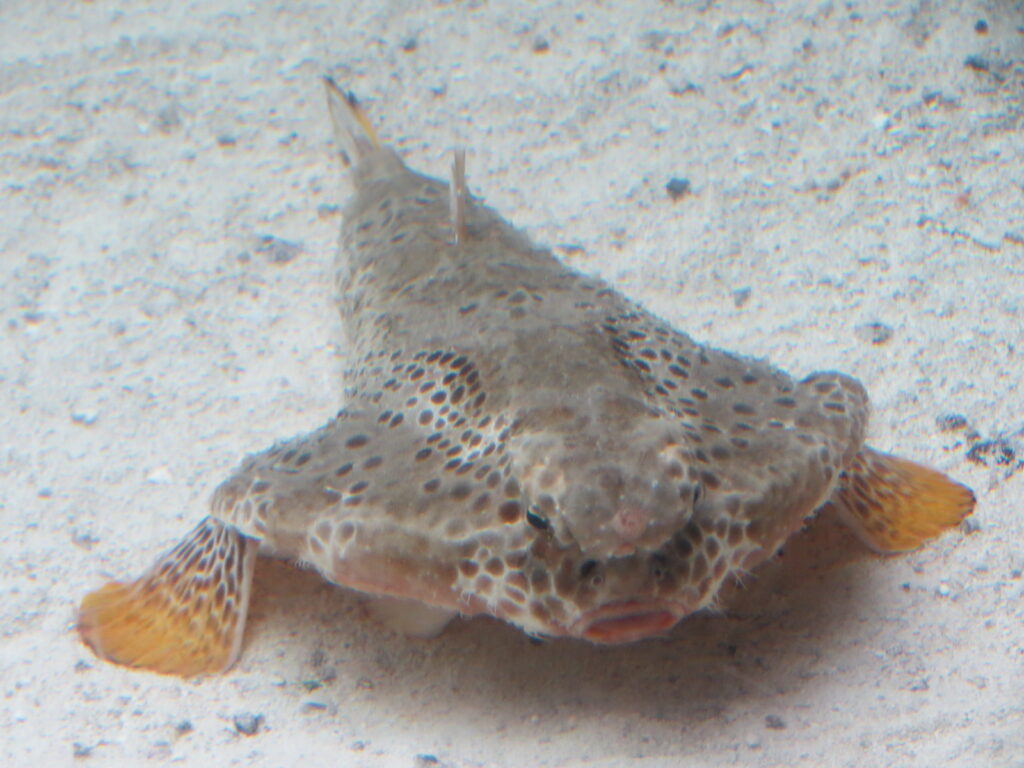 The post Is it fish or just foul? ‘Mutant’ sea creature with a nose, feet, tail and WINGS baffles Caribbean island appeared first on The Black Vault Case Files.