By Administrator on November 27, 2015 in From the Black Vault 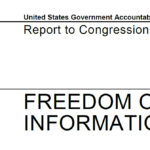 The Department of Homeland Security’s (DHS) Freedom of Information Act (FOIA) processing responsibilities are split between the department’s Privacy Office, which acts as its central FOIA office, and FOIA offices in its component agencies.

The Privacy Office has a number of oversight and coordination functions, including developing policies to implement FOIA initiatives, providing training, and preparing annual reports. Meanwhile, components’ FOIA offices are responsible for processing the vast majority of the requests received by the department, subject to regulations and policies issued by the Privacy Office. While components report FOIA processing costs to the Privacy Office, which then aggregates and reports them to the Department of Justice, reported costs are incomplete (for example, the costs do not reflect employee benefits or the salaries of staff outside the components’ FOIA offices who retrieve requested documents), thus hindering accountability for total costs.

Regarding duplication, GAO determined that certain immigration-related requests are processed twice by two different DHS components. The duplicate processing of such requests by the two components contributes to an increase in the time needed to respond to the requests. In 2011, DHS established a goal of reducing backlogged FOIA requests by 15 percent each year, and its component agencies have taken actions toward this goal, including increasing staff, reporting and monitoring backlog information, providing training, and offering incentives to staff for increased productivity. Although there was initial progress by the end of fiscal year 2012, backlog numbers do not account for an estimated 11,000 improperly closed requests, and the number of backlogged requests increased in fiscal year 2013 to a level higher than 2011.

Why GAO Did This Study