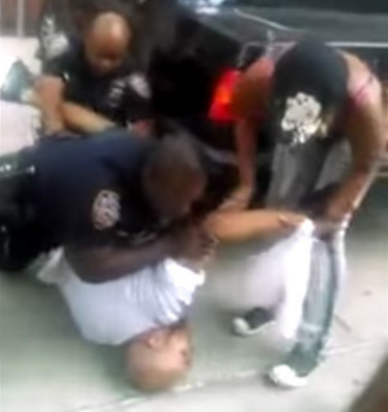 Editor’s Note: The cop STOMPED ON A MAN’S HEAD, a man who was already restrained (over suspicion of possession of a small amount of marijuana of all “crimes”) and in broad daylight in front of other people who caught it on tape… but he gets to avoid jail time?

A New York Police Department officer has avoided hard time at notorious Rikers Island prison for stomping on a head of a handcuffed man despite cries for help. Aside from two years’ probation, the cop is required to resign within 24 hours.

“This police officer intentionally and needlessly stomped on the head of a suspect who had already been restrained by fellow officers,” Brooklyn District Attorney Ken Thompson said at the sentencing Thursday. “And he did so in broad daylight and in front of a crowd of people.”

In April, Joel Edouard, 38, was found guilty after an amateur video showed him and other police officers arresting Jahmiel Cuffee in the summer of 2014. It was Edouard who, during the attempted arrest, pointed a gun at Cuffee and then kicked him in the head, despite bystanders yelling that he was being recorded.

At first he was charged with attempting to tamper with evidence, obstructing governmental administration and resisting arrest. As charges were dropped for Cuffee, Edouard found himself under investigation.

“He deserved to spend time in jail for committing such a blatant act of police brutality, but we accept the sentence imposed by the court,” Thompson said.

However, Judge Alan Marrus imposed only a part of the recommendation, explaining that he saw no “need to incarcerate” Edouard because “the victim recovered and was compensated through civil judgement,” according to the New York Daily News.

Marrus agreed with two years’ probation and also ordered Edouard, who has been on modified assignment, to resign by his own choice.

“If the [Police] Commissioner doesn’t terminate the defendant in 24 hours, the defendant must turn in a letter of resignation,”said Marrus, calling the case “a setback for police community relations.”

Since the 2014 police killing of an unarmed black teenager in Ferguson, Missouri, law enforcement agencies across the US have seen community relations significantly sour.

Michael Brown’s death at the hands of white officer Darren Wilson touched off mass demonstrations in Ferguson and across the US against racial profiling, police brutality, police impunity and the judicial system in America.

It revealed that US police officers get arrested about 1,100 times a year, meaning that roughly three cops are charged every day. The data covers 2,529 state and local law enforcement agencies from 1,205 counties and independent cities in all 50 states and the District of Columbia.

“The first general observation is that police crimes are not uncommon,”the study said. “Police officers get arrested for crimes with some regularity in jurisdictions around the nation.”

“These cases threaten to undermine public trust in both the authority and legitimacy of state and local law enforcement organizations, and the work of law-abiding sworn officers who go about their job selflessly, efficiently, and professionally every day,” the study read.

The government-funded study reflects a broad range of offenses committed by police, which are commonly related to sex, drugs, alcohol, domestic violence and extortion.

At the same time, he explained, “a significant portion of these so-called off-duty crimes also lies within the context of police work and the perpetrator’s role as a police officer, including instances where off-duty officers flash a badge, an official weapon, or otherwise use their power, authority, and the respect afforded to them as a means to commit crime.”

Contributed by RT.com of RT.com.

Outrage as Armenia concedes defeat in battle with Azerbaijan

Rep. Lucy McBath: ‘Lots of hope because women are getting things done’

Outrage as Armenia concedes defeat in battle with Azerbaijan