By Joseph Mercola on December 19, 2017 in Alternative News

N-acetylcysteine (NAC) — a precursor which is needed for glutathione biosynthesis — is an incredibly useful supplement that few people have even heard of. Many of its benefits relate back to the fact that it helps boost production of glutathione, an important antioxidant your body produces naturally that helps reduce free radical damage and plays a role in the detoxification of heavy metals and other harmful substances.

NAC is both safe and inexpensive, and has been commercially available for a long time. It’s also generally well-tolerated and has no known serious side effects. Considering its wide array of health benefits, it’s a supplement worthy of consideration for many. As noted in a recent medical review of NAC’s many clinical uses, it is a:1

NAC supplementation can also help “pre-tox” your body when taken before alcohol, thereby minimizing the damage associated with alcohol consumption — a tidbit that may be useful to know in light of the approaching holidays. NAC is a form of the amino acid cysteine, which in addition to increasing glutathione also reduces acetaldehyde toxicity that causes many hangover symptoms.2

Taking NAC (at least 200 milligrams) 30 minutes before you drink can help lessen the alcohol’s toxic effects. NAC is thought to work even better when combined with vitamin B1 (thiamine).3 Vitamin B6 may also help to lessen hangover symptoms.

Since alcohol depletes B vitamins, and B vitamins are required to help eliminate alcohol from your body, a B vitamin supplement taken beforehand, as well as the next day, can be helpful. All of that said, it’s important to realize that this protocol will not reduce your susceptibility to alcohol poisoning or other acute adverse events associated with binge drinking, so please use common sense and drink responsibly.

NAC Is a Potent Antidote to Acetaminophen Toxicity

NAC is also used in medicine as an antidote for acetaminophen toxicity. Like alcohol, one way that acetaminophen causes liver damage is by depleting glutathione. If you keep your glutathione levels up, the damage from the acetaminophen may be largely preventable. This is why anyone who overdoses on Tylenol receives large doses of NAC in the emergency room — to increase glutathione.

Mortality due to acetaminophen toxicity has actually been shown to be virtually eliminated when NAC is promptly administered in cases of acetaminophen overdose. While I generally do not recommend using acetaminophen-containing drugs for minor aches and pains, they are sometimes necessary to temporarily suppress severe pain, such as post-surgical pain. So, if you ever use acetaminophen I strongly recommend taking it along with NAC.

And, if you have children and keep acetaminophen in your home, I strongly recommend keeping a bottle of NAC as well in case of accidental overdose. NAC therapy should be initiated within eight hours of an acute overdose for best results. If you suspect an overdose has occurred, seek medical help right away. If this isn’t an option, the World Health Organization (WHO) recommends the following protocol:4

“Oral administration is the preferred route for NAC therapy unless contraindications exist (e.g aspiration, persistent vomiting). The usual recommended loading dose is 140 mg/kg followed in 4 hours by a maintenance dose of 70 mg/kg orally given every 4 hours. This dosing is commonly recommended to be continued for 72 hours; however more recent clinical experience supports tailoring the duration of therapy to the patient’s clinical condition.”

The most common use of NAC is for liver support in general. A 2010 study5 — in which it was noted that the antioxidant resveratrol has been found to enhance replication of the hepatitis C virus and hence is not a suitable supplement for those with hepatitis C — suggests NAC may be a better alternative for this and other chronic liver diseases.

“Consistently, we found that [NAC] modulates the expression of iNOS [editor’s note: iNOS is an inducible and calcium-dependent isoform of the enzyme nitric oxide synthase or NOS, which helps synthesize nitric oxide] in human hepatocytes stimulated by proinflammatory cytokines,” the authors write.

“The effect occurs by blocking the activation of the iNOS promoter, and is associated with modulation of NF-κB activity, a central transcription factor for induction of iNOS expression. The biological phenomenon might well be the basis of the therapeutic effects of NAC on chronic liver diseases different from those caused by acetaminophen intoxication.”

Other Health Benefits of NAC

Aside from its hepatoprotective effects, research suggests NAC may also help:6,7,8 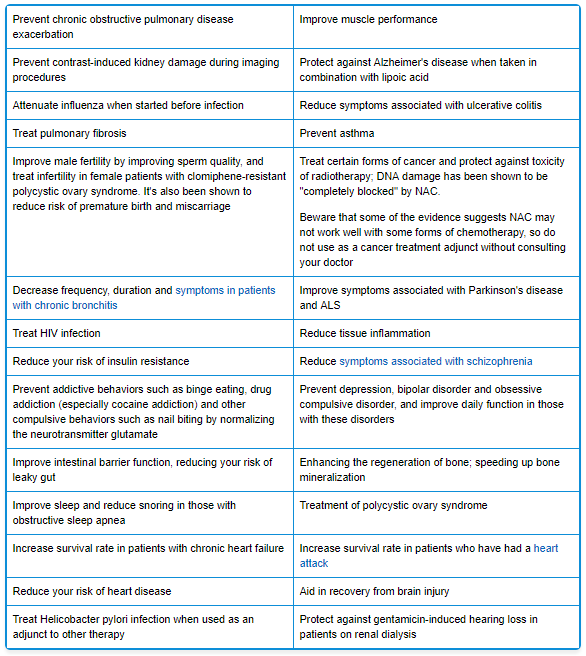 As you can see, the list of NAC’s potential uses is quite long; there’s even evidence it may be an effective remedy against acne, decreasing acne outbreaks by about half.9 Some of its most promising uses is as a neuroprotectant. Scientists are currently investigating it as a treatment for Parkinson’s disease — a disorder that has been linked to glutathione deficiency in the substantia nigra, a region that houses dopamine neurons.10

Research looking at autopsied brains suggests Parkinson’s patients have barely detectable levels of glutathione in this brain region. This deficiency is not restricted to Parkinson’s, however. Subsequent studies have found glutathione deficiency in the substantia nigra is common in a number of other neurodegenerative conditions as well, including progressive supranuclear palsy, multiple system atrophy and Alzheimer’s disease.11 As noted in a recent article by Science of Parkinson’s:12

“Researchers have subsequently found that decreased levels of glutathione does not directly result in dopamine cell loss … but it does make the cells more vulnerable to damaging agents (such as neurotoxins … ) This has [led] investigators to ask whether administering glutathione to people with Parkinson’s disease would slow [down] the condition.”

In one small-scale clinical trial,13 600 milligrams (mg) of intravenous glutathione was administered twice a day for 30 days, after which the patients were monitored for up to four months. All experienced significant improvement, with an average decline in disability of 42 percent. The effects lasted for two to four months after the treatment ended. The remarkable effects of the treatment are demonstrated in the following video.

Other studies have confirmed the usefulness of NAC in the treatment of Parkinson’s. Several are discussed on Science of Parkinson’s, so for more information, please see that original article.14

As just one example, a randomized study15,16 on 23 patients found a combination of 600 mg of oral NAC twice a day plus a weekly IV infusion of NAC at 50 mg per kilogram of body weight, had a very consistent, neuroprotective effect, improving patients’ mental and physical abilities. Brain imaging also confirmed beneficial changes were in fact occurring in the brain.

PTSD, Depression and Treatment of Addiction

Another area where NAC shows particular promise is in the treatment of mental health disorders, including post-traumatic stress disorder (PTSD), depression and substance use disorders. In one recent study,17 PTSD symptoms in war veterans decreased by 46 percent, substance use cravings by 81 percent, and depression by 48 percent after NAC treatment. Here, patients took 2,400 mg of NAC a day for eight weeks.

As a group, the veterans no longer met diagnostic criteria for PTSD at the end of their treatment. This, lead author Sudie Back, Ph.D., said, “are some of the best outcomes we have seen in the literature for a medication.” As reported by Medical University of South Carolina (MUSC):18

Groundbreaking basic science research by [Back and Peter Kalivas, Ph.D., chairman of the department of neuroscience at MUSC] has shown that levels of glutamate transporters in the brain are decreased in substance use disorders, and NAC can help restore those levels and guard against relapse in animal models of substance use disorder.

Because evidence suggests that substance use disorder and PTSD share overlapping neurobiological pathways, Sudie Back … hypothesized that NAC treatment with therapy would be a novel approach to treating the co-occurring conditions. Back is a professor in the Department of Psychiatry and Behavioral Sciences at MUSC and a staff psychologist at the Ralph H. Johnson VA Medical Center.”

In studies19 looking at NAC for bipolar depression, individuals taking 1 gram of NAC twice a day for two months reduced their depression score by eight points and reported improvement in functioning and quality of life. It’s also been shown to help those with treatment resistant depression and, to a lesser degree, major depressive disorder.

NAC May Improve Fertility in Both Men and Women

The last area I will home in on here is fertility, as both male and female infertility are on the rise. A number of studies20 have demonstrated the benefits of NAC for fertility in both men and women. As noted above, NAC has been shown to improve sperm quality in men. It’s also been shown to improve the ovulation rate in women by 52 percent.21 In this study, women took 1,200 mg per day of oral NAC for five days, starting on the third day of their menstrual cycle. Endometrial thickness also significantly improved.

Other research shows NAC helps improve the quality of a woman’s eggs22 — a factor that can improve your chances of not only getting pregnant naturally, but also improve your odds of successful IVF treatment. It also lowers your risk of miscarriage, and increases the pregnancy rate in women who have had recurrent miscarriages.23

Endometriosis, which is a common cause for female infertility, is also improved by NAC supplementation.24 In one Italian study,25women who took 600 mg of NAC three times a day for three consecutive days per week, for three months, saw such significant improvement that half of the treatment group — 24 out of 47 — were able to cancel their surgeries. Eight of the 47 women receiving NAC had complete remission of cysts. In comparison, only one of the 45 women in the control group (which received a placebo) was able to cancel her surgery and only four had remission of cysts.

NAC is widely available as an oral dietary supplement and is relatively inexpensive. Unfortunately, it’s rather poorly absorbed when taken orally. According to some studies,26,27 oral bioavailability may range between 4 and 10 percent. Its half-life is also in the neighborhood of two hours, which is why most study subjects take it two or three times a day.

Due to its poor bioavailability, the recommended dosage can go as high as 1,800 mg per day. No maximum safe dose has yet been determined, but as a general rule, it’s well-tolerated, although some do experience gastrointestinal side effects such as nausea, diarrhea or constipation. Should this occur, reduce your dosage. It’s also best taken in combination with food, to reduce the likelihood of gastrointestinal effects.

Also keep in mind that since NAC boosts glutathione, which is a powerful detox agent, you may experience debilitating detox symptoms if you start with too high a dose. To avoid this, start low, with say 400 to 600 mg once a day, and work your way up. Also, if you are currently taking an antidepressant or undergoing cancer treatment, be sure to discuss the use of NAC with your physician, as it may interact with some antidepressants and chemotherapy.

View all posts by Joseph Mercola →